Founded by Chogyam Trungpa Rinpoche in 1984, Gampo Abbey is a Western Buddhist Monastery in the Shambhala Tradition, located in Nova Scotia, Canada.

Under the direction of Sakyong Mipham Rinpoche, the spiritual head of Shambhala International, Gampo Abbey is guided by its abbot the Venerable Khenchen Thrangu Rinpoche and principal teacher Acharya Pema Chodron. 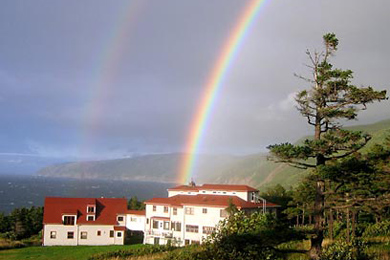 ….. That sentiment was the seed for establishing a monastery in the west. In 1984 a farmhouse on the remote tip of Cape Breton Island was purchased as the first step in establishing Gampo Abbey. When Trungpa Rinpoche visited the site that overlooks the Gulf of Saint Lawrence on Cape Breton Island a double rainbow appeared in the sky.

Under the guidance of The Venerable Kenchen Thrangu Rinpoche, whom Rinpoche appointed in 1985 to be Abbot, and principal teacher Acharya Ani Pema Chodron, Gampo Abbey has flourished as a contemplative community for monastics and lay practitioners alike. The Abbey has grown to include the main monastery; a 3 year retreat center, Sopa Choling; a monastic college, the Vidyadhara Institute; the Stupa of Enlightenment, consecrated by Thrangu Rinpoche in 1999; and cabins for individual retreat.

The monastic traditions are the Abbey’s heart – the observation of the precepts, individual and group practice, study, work, and the challenge of communal living. Gampo Abbey observes the same traditions common to all Buddhist monasteries: the bimonthly sojong confession ceremony; Yarne, the traditional rainy season retreat held since the time of the Buddha; and Gagye, the lifting of the restrictions at the end of Yarne. In addition, retreats are offered to visitors such as the youth dathun, during which it is possible to take ordination for a limited period of time. Throughout the year education is offered for Abbey residents.

A Clear and Precise Container 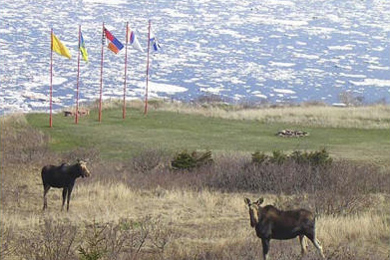 Monastic life at Gampo Abbey is driven by the commitment to wake up fully through the training of conduct as prescribed in the Vinaya (literally, ‘basket of discipline’). It is inspired and guided by the profound view of the mahayana teaching and the vast skillful means of the vajrayana. Trungpa Rinpoche said that the Vinaya, on the whole, is very gentle and offers guidelines for how to lead a healthy life. The monastic precepts are a clear and precise container that allow us to give up frivolity, and distraction and to focus fully on our spiritual life. In addition, the Vinaya contains the only teachings the Buddha gave on how to live in an awakened community. It is the Buddha’s blueprint for a harmonious society, and while some of the rules of conduct may seem archaic or culture specific, its core meaning is timeless and defies cultural stereotyping.

Gampo Abbey supports and trains those who have chosen to be life-long monastics with the Abbey as their home, as well as those who live there as temporary monastics, or lay people. Within the Tibetan tradition the Abbey’s practice of temporary ordination is unique. The practice is common, however, in other parts of Asia. Temporary ordination fulfills two purposes. It gives the aspirant to life-long monasticism the experience of monastic life before entering more deeply into the monastic path, and it offers lay practitioners an opportunity to experience the renunciation and discipline of the monastic path for a defined period of time. Participants in the seven-week winter retreat, yarne, from as far away as South Africa, Sweden, and Australia and South America take temporary ordination. However, everyone who comes to the Abbey, be they lay practitioners or monastics, temporary or fully ordained, live by the five precepts of refraining from killing, stealing, sexual relations, lying, and the use of intoxicants.

Why would someone choose to live at Gampo Abbey? It is a popular notion that people choose to live in a monastery to escape or hide from the world. In reality, the intensity and simplicity of Abbey life demand that we become more intimately involved with our lives and life in general, a life not driven by personal concerns and habitual patterns. The intensity of community life lived in accordance with the precepts demands that we wake up and grow up.

Acharya Pema says, if you become a monk or a nun you put the desire to wake up at the center of your world. Everything else, whatever it might be, stands in relation to that and becomes a vehicle for waking up further. Thus, monastic life is actually an opportunity to go deeper.

At first life at the Abbey seems rather idyllic, but, as Ani Pema notes, when you make the commitment to stay for nine months, or when you decide that this is your life’s journey, then all those places within yourself that you don’t want to surrender, become highlighted. You begin to relate to those areas in your habitual ways and complain about a lot of things, but it is like complaining in a house of mirrors. Living within the precepts of the Abbey community is a tremendous support for becoming honest with oneself. In the words of one of our nuns, “Abbey life has a certain starkness, an unclutteredness that makes personal resistance all the more apparent.”

Life at the Abbey is very earthy and very full. Though residents might be some distance from “civilization,” because the community is busy and intimate, one rarely feels isolated. And while the silence might seem intense (until noon in the morning and after eight in the evening), and the discipline challenging (4-1/2 hours of practice each day), many find that it is that silence and discipline that lets in fresh air. 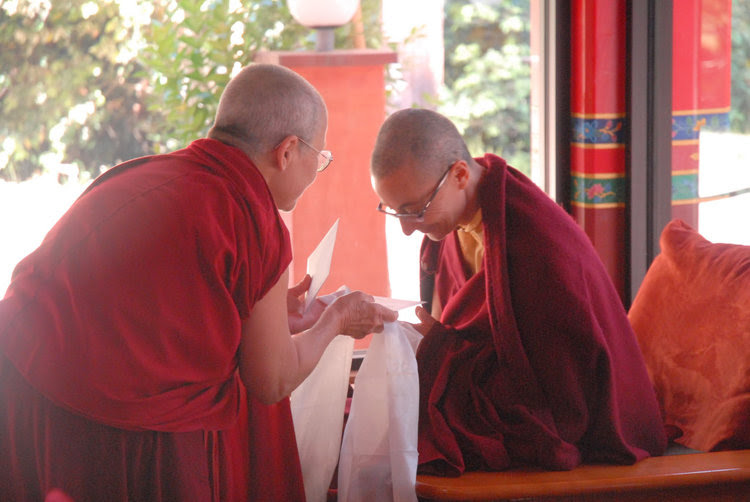 For 2500 years, Buddhist ordained and lay practitioners have relied on one another in their pursuit of liberation. In today’s complex world, finding inner and outer refuge, and participating in community life, seem ever more essential supports to overcoming obstacles along the path. Pema Chöling, a monastic residence in Crestone, Colorado, was purchased and donated to this community by the Pema Chödrön Foundation to support western monastics on this path.

The monastics residing at Pema Chöling have dedicated themselves to their vision of:

Read more about this wonderful community at: https://www.pemacholingcommunity.org/ 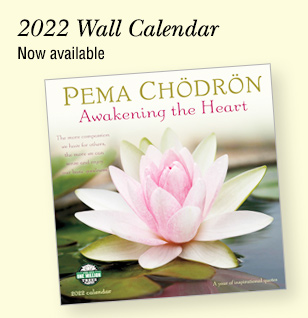 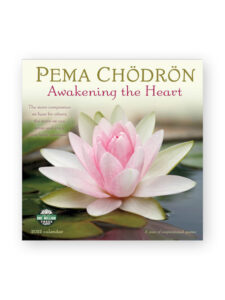